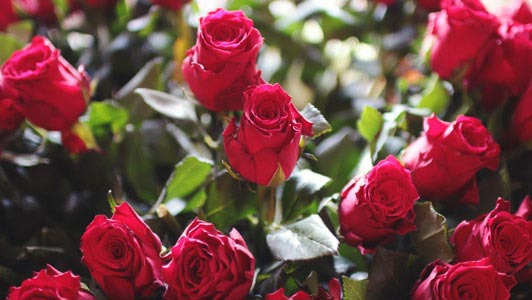 When the calendar turns to February, we start to think of love. February has for centuries been designated the month for lovers, with the primary celebration being on February 14, St. Valentines Day. We send cards, flowers, and candy and our children give out Valentines in school. Valentines Day reminds us to tell our loved ones just how much we care about them.

But have you ever stopped to think about the history of the holiday? Do you know why February 14 is called St. Valentines day and how the tradition of sending cards to each other developed? How did that day ever become associated with love?

Valentines Day was originally created as a substitute. In the fifth century A.D., the Catholic Church attempted to be rid of a common pagan fertility rite that the Romans had been taking part in since the fourth century B.C. Every year the Romans celebrated a young man’s rite of passage to the god Lupercus by holding a lottery in mid-February. The names of willing teenage girls were placed in a box and drawn at random by teenage men. By this lottery a young man was assigned a young woman companion for their mutual pleasure (often sexual) for the duration of a year. After the year was up another lottery was held. As Christianity spread and the leaders of the Church resolved to do away with this practice by picking a “lover’s saint" to replace the god Lupercus. They picked Valentine, a bishop who had been martyred in the third century A.D. for the cause of love.

In 270 A.D. Emperor Claudius had issued an edict forbidding marriage because believed that married men made poor soldiers, not wanting to leave their families to go to battle. Valentine, bishop of Interamna, disagreed with the emperor and invited young lovers to come to him in secret to be married. When Claudius found that he was performing secret marriage ceremonies, he was incensed. He had Valentine seized and brought before him. When Valentine refused to change his views and renounce Christianity, he was put in prison to await execution. In February of 270, Valentine was clubbed, stoned, and then beheaded.

Tradition tells us that while Valentine was in prison he corresponded with those under his care by sending little letters and love notes to those in his parish. It is also believed that while he was in prison the bishop fell in love with the blind daughter of the jailer, Asterius and that God enabled him to miraculously restore her sight. Tradition tells us that his farewell message to her contained a closing that transcended time: “From Your Valentine”.

In A.D. 496, Pope Gelasius outlawed the Lupercian festival, but cleverly retained the lottery, because he was aware of the Roman’s love for games of chance. But now instead of names of women in the box, there were placed names of saints. Men and women both picked slips of paper and for the upcoming year they were expected to imitate the life of the saint whose name they had drawn. And St. Valentine was advanced as the overseer of the whole thing. It took some time for this new tradition to take hold, but eventually, more and more Romans relinquished the Lupercian festival and replaced it with St. Valentines Day.

Traditionally, mainly due to the Lupercian lottery, mid-February was a Roman time to meet and court prospective mates. While the Lupercian lottery was replaced, most Roman young men were not totally satisfied with the lottery of saints’ names and the new lottery did not last long. Instead the young men instituted a custom of offering women they admired and wished to court handwritten greetings of affection on February 14. The cards became known as Valentine’s Day Cards.

The Language Of Flowers
According to old traditions, sending different kinds of flowers sends a secret message to the one you love. Here are a few of these secret flower messages:

Red roses = I love you!
Yellow roses = I love you, but I don't know if you love me."
White roses = Our love is pure.
Four leaf clovers = a wish for good luck.
Orange blossoms = everlasting love.
Bleeding Heart = Hopeless, but not heartless.
Gardenia = I love you secretly.
Gladiolus = You pierce my heart.
Lily-of-the-Valley = Let us make up.
Rose - I love you passionately.
Sweet William = You are gallant, suave and perfect.
Violet = I return your love.
Green leaves represented hope in a love affair. (Often rumored to be the reason why British girls sprinkled bay leaves with rose water and put them on their pillows on Valentine's Day Eve. They wanted to see their loved one in their dreams.)